Rabies in hamsters is a case of science fiction.But the disease is incurable, causes 100% death, so ignoring even a slim possibility of infection would be wrong.

The rabies virus multiplies in the cells of the nervous system, causing a specific inflammation of the brain.

Infection is possible only by direct contact, if the saliva of an infected animal gets into a wound or mucous membrane.

The virus travels through the nerves from the wound to the brain. The death of nerve cells causes a variety of neurological disorders. Death occurs from paralysis and suffocation (breathing stops).

The question is, do hamsters get sick with rabies, not quite correct. To any virus susceptible warm-blooded animals in the case of infection, even birds. For humans, the disease is also fatal, hence, a natural interest is whether there is rabies in hamsters. These rodents are the most common Pets, and quite often hamsters bite their owners. If the hamster bites a child to blood, parents want to understand whether you need some specific therapy.

Rabies – natural focal disease. The virus circulates in populations of wild animals often carry rabies wolves, foxes, raccoons. Sporadic cases are regularly detected in rodents (rat, hamster, squirrel). There are areas officially affected by this dreadful infections, the veterinary station or on the website of the Rosselkhoznadzor.

Not to say that hamsters don't get rabies, because isolated cases occur in the world. Sometimes the infected rodents were biting the owners.

In Russia – the one in Novosibirsk, 2003. Bought at a pet store hamster died, pre-biting 8-year-old child. Bought rodent in July, became ill and he died in September. Rabies confirmed posthumously in the laboratory, the official examination.

In September of 2006 in Belarus (in June near Minsk) 12-year-old girl bitten by a rabid hamster. Purchased on the market in Zhdanovichy rodent died 2 days after the incident. Examination revealed rabies. Fortunately, the child began the course of vaccination without waiting for the result of the tests, so the girl survived.

March 2012, Ukraine, Zhitomir. Three hamster purchased on the bird market, died of rabies 10 days after purchase. Three children (1, 5 and 9 years old) was hospitalized for a course of rabies vaccine.

Cases are rare, but they serve as a reason to start the development of a vaccine against rabies for rodents. While this drug does not exist, preventive vaccinations are only predators (dogs, cats, ferrets). 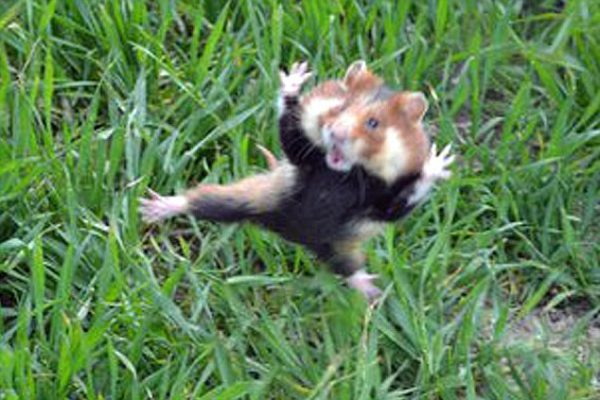 If the region of residence affected by this terrible disease, it is better to know in advance what are the signs of rabies in hamsters.

For rabies is always characterized by an unusual behavior of the animal, and not always is aggression. Rabid foxes can be gentle, lose the fear of man, lick hands. Hamster just loses orientation in space, ceaselessly wandering around the cage with no obvious purpose. The missing or perverted appetite (eating of inedible objects). Rodent worried cheeps sometimes shows aggression.

At the final stage of the disease paralysis of the pharynx causes the inability of taking food and water, as well as profuse salivation. Before his death, the animal falls into a coma, there are convulsions.

Symptoms of rabies in hamsters can be blurred in such cases, the owners say that the rodent had died suddenly. Usually the animal dies no later than the week after the brain damage.

Actions by the bite

Decorative hamsters can easily bite a man to the blood of their strong sharp teeth. Djungarian hamster is prone to show aggression if not trained to arms. Syrian bite less often, but harder owing to the large size.

If the injury has caused a rodent home, contact the rabies paragraph not required. When infected in the laboratory rodents is highly sensitive to rabies virus, but in nature, rarely get sick. Syrian hamsters along with rabbits and Guinea pigs used for the biological test for rabies.

If a pet dies under strange circumstances – it should be attributed to pathological examination to the veterinary laboratory, which will establish the cause of death.

Sometimes people already and to think have forgotten about the bite of a loved Jungaria begins to look for the information about rabies and starts to panic, goes to the vaccine.

It should be remembered that vaccination is done not later than 2 weeks from the time of the bite.

The course of treatment are not completely safe, and it is necessary to strictly comply with medical recommendations, such as the prohibition of alcohol.

Started treatment with rabies vaccine can be interrupted if the hamster remained alive and healthy for 2 weeks after bitten person. Although rabies has a long incubation period, the virus appears in the saliva of a sick animal immediately, but 10-12 days before clinical signs of the disease. In herbivores it may not be contained in saliva, and to hit only the nervous tissue.

Protection against any infection is to high-quality aseptic treatment of the wound. Simply put, the sting should be rinsed with plenty of running water, wash with soap and water and apply antiseptic (hydrogen peroxide).

Rabies cannot be treated and vaccination for rodents does not exist.

Fortunately, the probability of occurrence of this terrible disease in the hamster tends to zero.

Prevention is the following:

Aggressive behavior in rodents is less likely a true picture of rabies in these animals. If a hamster bites, it is not a reason for euthanasia. You should try to understand why the animal tries to attack and to take time to tame and calm him down.

Causes of baldness in hamsters