Noticing the tumor of the hamster, owners often wonder what happened to the darling, where did this attack have a healthy, active animal.A preliminary conclusion can be drawn from the localization of education:

Examining the animal, should be aware of the location of the token glands in males, which is often mistaken for sore.

From Djungarian hamster, she is on her stomach, and covered with yellowish crusts. The Syrian hamster are two of them symmetrically on the sides, in front of the rear legs. Looks like a black oval bald spots. This is a normal anatomical education, and to treat there is nothing, but the observation would not be amiss: often, the hamsters register inflammation or neoplasm sapagovas cancer. 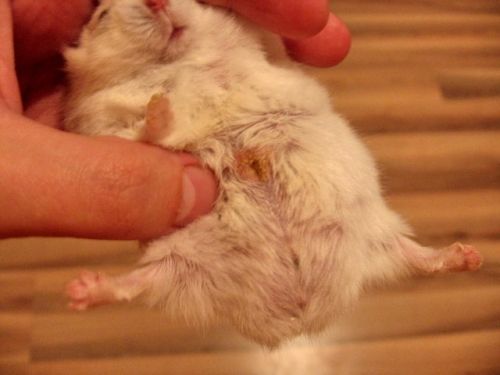 Growths in the ear is not always a malignant tumor. Hamsters otitis (inflammation) of the middle ear may be accompanied by tissue growth according to the type of cyst. In this case, the outgrowths filled with pus from the ears is an unpleasant odor. Treatment – antibiotics locally and systemically, but otitis media is often repeated again and again, not wilechase to the end. 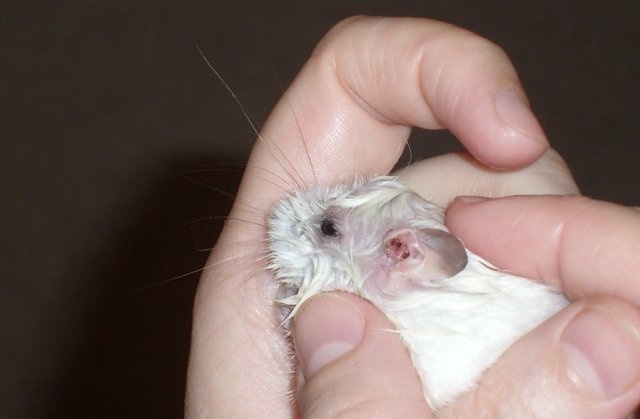 Hamsters can get sick papillomatosis is a viral infection that causes the formation in the skin dense warts characteristic species due to the accelerated growth of the epithelium. Papilloma rarely have to remove surgically: this is a benign one, and when the body cope with the virus, may be the cure itself.

As a result of fights or other injuries may occur purulent inflammation, which looks like a limited swelling. Lump on the side can be just an abscess and not cancer. At first it is hard and painful, and the skin is red and hot to the touch. Then the tumor softens, there is a fluctuation. Can hair falling out. At the final stage of the abscess opens spontaneously and the wound, from which flows pus. 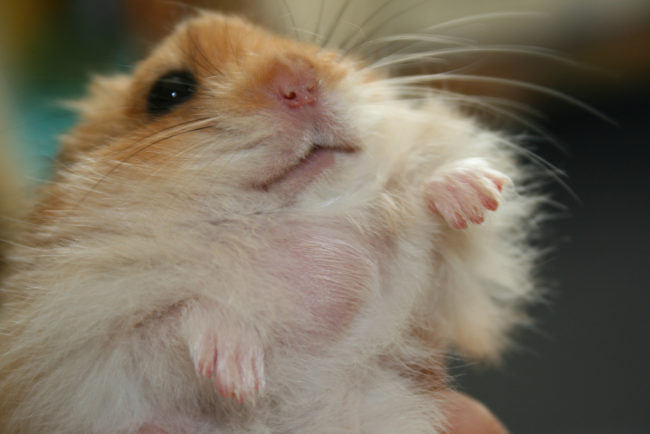 When abscess hamster treatment is the use of systemic antibiotics ("Baytril a 2.5%" subcutaneously 10 mg/kg). Necessary debridement: the opening of the abscess, cleanse the cavity and lavage with antiseptic. The wound is washed every day and protect from re-infection.

If the abscess is not treated properly, the process becomes chronic, and there is a fistula, which would be difficult to heal.

The tumor on the cheek of the hamster

A special case of an abscess is inflammation of the cheek pouch, the most likely reason that the hamster swollen cheek. Wound comes from the inside, with a sharp object, or the wrong kinds of food: chips, dry pasta, seeds and nuts, in shell, hay. The wound get infection and occurs zagnoenie.

When the pet has swollen cheek, it is better not to delay a visit to the doctor. Purulent inflammation spreads to the surrounding tissue, and next to the cheek are the most important structures: the eyes, ears and brain. The pain does not allow the baby to eat, and the animal quickly weakens. 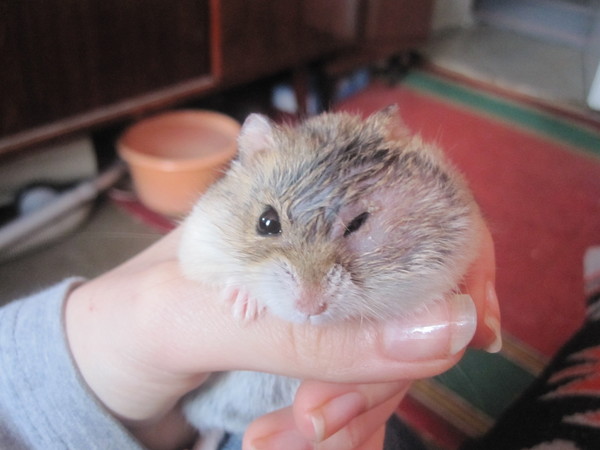 If the animal cheeks swelled symmetrically, they should carefully massage towards the face. Then the hamster reflexively throw the contents of a cheek pouch, and it will be clear if there's a problem. While maintaining the seal to check the contents, pulling the edge of the lips with your hand or a stick and simultaneously pressing her cheek under the ear. This should be done firmly locking the hamster and trying not to damage the mucosa.

Sometimes it is wiser to treat a swollen cheek at the clinic under anesthesia. The doctor can completely remove the cheek pouch, remove foreign objects, wash with an antiseptic (aqueous solution furatsilina, chlorhexidine), to open the abscess to release the pus from the cavity.

When the hamster lump on cheek, cheek bags except the doctor is obliged to check the bite of the animal.

Rodents teeth grow all his life, and should normally grind. If not, the root teeth grow back – it's called malocclusion.

When dental problems are observed:

If the length of the teeth is not correct, the hamster will die.

A tumor the hamster on the neck may also indicate an inflammatory process in the oral cavity then increases the nearest, barrier the lymph node and looks like a solid lump in the area under the lower jaw. Lymph nodes increase in systemic and infectious diseases.

What to do if a hamster swollen foot

If the pet swollen paw in the first place I suspect a closed fracture of the paw of the hamster.

An accurate diagnosis can be obtained by making an x-ray on a digital camera of good quality. However, it is more of academic interest, neither surgery nor a cast in a veterinary clinic will not do, is prescribed only rest.

What to do if swollen foot, but the cause is not known:

In the worst case a tumor on the foot is osteosarcoma. This is a malignant cancer which progresses rapidly and is not treatable.

Over time, paws is no longer visible, the whole limb is a tumor mass, passing on the torso of the animal. Osteosarcoma is more common in aged animals (1-2 years).

Why do hamster large testicles

Inexperienced owners after puberty, males begin to sound the alarm, figuring out what to do if your hamster is too big testicles. But large relative to body size, the testes of rats – a common phenomenon. The Syrian hamster they are making a difference (pair of tubercles in the abdomen) at the age of 2 months and another month for them as the wool and you notice that the testicles are greatly increased. Hamsters can be unilateral cryptorchidism – when one testicle descended into the scrotum, and the second remains in the abdominal cavity. Then swelling in the area of the tail is one-sided. 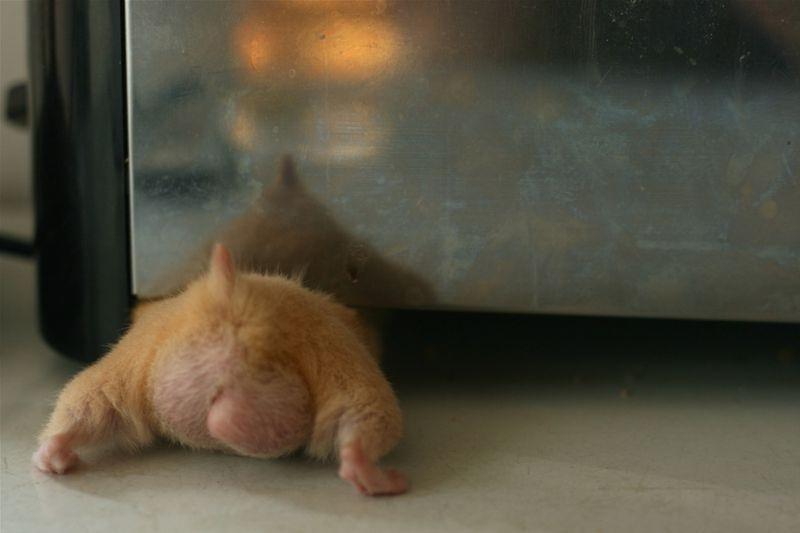 When the animal is ready to reproduce, in the testes accumulated seminal fluid. Often "a tumor on the ass," the young dsungarica is manhood normal size.

Most often when the content in the same room (but in different cells) males and females.

Red and hot skin on the testes, signs of pain are signs of infection, orchitis. Treatment with antibiotics, but not always successfully.

Meet, and benign and malignant tumors of the testes (seminoma). Regardless of the type of education the only treatment is removal of the affected organ (castration) under General anesthesia. For Oncology characterized by unilateral lesion, in contrast to the orchitis.

Upon detection of tumors pet you have to take risks and to agree to surgical removal. Education rodents grow rapidly, the skin does not stand up and bursts, forming a foul-smelling non-healing ulcer. The tumor mass interferes with the animal to move, sometimes the hamsters are trying to gnaw foreign tissue and bleed. If cancer affected limb, amputation is the best solution. If the tumor is on the body – it is necessary to remove while it's still small, otherwise it will be difficult for the surgeon to close the skin defect after removal.

The use of inhalation anesthesia in recent years increased survival in rodents after surgery. The doctor should have experience with rodents, to watch that tiny body doesn't get hypothermic during anesthesia. Fasting before surgery is not assigned, and even harmful.

Removing the tumor will not cure the hamster, he will remain sick and may die from tumor metastases to other organs (lungs, liver). But it can improve the quality of life.

If cancer affected the internal organs, we can only guess by the symptoms or asymmetry of the abdomen. The operation in this case does not make sense and the operation is reduced to euthanasia on the surgical table.

Cancer in hamsters is not treatable in connection with the short life of these animals. They can not tolerate surgery, and the anesthesia, and any medications. Although surgery everyone, even the hamsters of Jungaria. Discovering that the hamster on the belly bump, you should bring him to the doctor. Specialist will help to distinguish tumor from inflammation or natural formations.

Causes of baldness in hamsters

Rabies in hamsters — a rare and dangerous phenomenon

My hamster the finger of the hind feet have grown some sort of red bump( thought he broke or pinched when the ladder they climbed, but it took more than two months and the bump is not((( even more costs! What's that?

Good afternoon, unfortunately due to the large amount of spam in the comments, your question was not seen on time.And hand red. Eyes slavilsya as I was treated
From what I have seen was very sorry for him(((( 🙁

We have his hamster recently found a lump on her tummy - this cone was formed, she then gnawed up the blood. We anointed the conventional wound healing means, which is used by themselves, Resinosum. First, all healed, and secondly, the hamster began to eat, his appetite came activity! We are very happy, although now every night we examine it from head to tail.