The owner of the rodent should not only care, but also to find out in advance what to do if a hamster dropped from a height.The owner released it literally a minute to clean the cage. 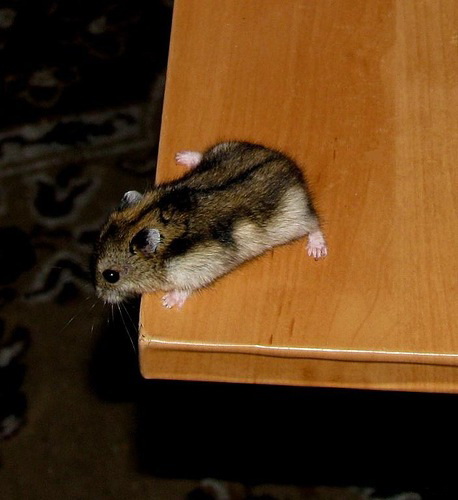 A fall from furniture

Worse, if the floor is tiled. But the relative soft surface (linoleum, carpet) will not protect the pet from injury: hamsters don't know how to roll over and grouped in flight. Fortunately in the fall with the furniture the hamster can get off easy fright.

If a hamster fell from a height of human growth, damage can not be avoided. Animals possess an independent nature and can escape from the hands of a loving master, sliding out and falling to the floor. It happens that suddenly the hamster to bite, and people involuntarily flung the tiny rodent.

Even in your own house pet can climb up the lattice bars of the cage and fall down. Therefore, multi-tiered housing for hamsters are not recommended.

The consequences of the fall 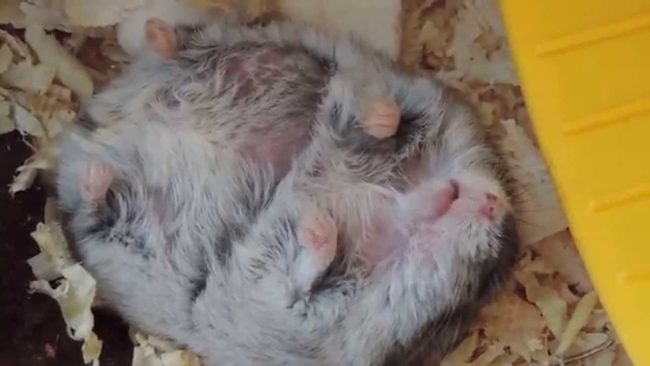 If the pet that just fell off the table, a bullet rushed under the sofa or to another secluded place, the animal scared to death. Stress is bad for hamsters, so you'll have to wait some time before catching a pet.

The owner wants to see "jumper" and make sure he was okay. But if you start to pick out the fugitive MOP, frightening and touching, the consequences of such care will be more dangerous to the animal than the injury itself.

Extreme degree of nervous shock – the shock. In this condition the hamster fell as if stunned: lying on your back or on your side without movement for up to 5 minutes. When he awoke, the creature digging at the moment litter is hiding. Djungarian hamster or a hamster the Campbell can be lost due to mere stress.

Help: put animal in a cage, keep warm and do not disturb for some time.

In a state of shock pet can actively move around even on a broken limb. Therefore, to draw conclusions about the effects injuries have on the next day after the fall.

If a hamster's broken foot, it swells, can be red or blue, unnaturally twisted. In a closed fracture the rodent just unnatural moves, lame. With an open wound and visible damage to the bone.

When fracture of the spine hind legs will be paralyzed. If in addition to range damaged internal organs, the animal will die. When broken only by the spine the animal will survive if the functions of urination and defecation. Paralysis of the pelvic limbs is most often irreversible, but the hamster-the disabled person can lead an active life.

When falling from a height the hamster can injure any internal organs, the doctor or owner only guess. Bleeding due to rupture of the liver leads to death of the animal. When the bladder ruptures, the animal does not write, and the stomach is increased, until the pet will not die.

The Syrian hamster is the largest of the decorative, weighs 120-200 g, but even they have a difficult diagnosis (ultrasound, x-ray), and the dwarf hamsters are almost impossible.

Hitting his face, the hamster can break the long front incisors. The problem itself is not fatal, but can lead to more serious problems if not correct the bite. After the fracture of the tooth pair cutter and grinds excessively it grows: its long handle, cutting the usual culturecom. While the cutters will not recover (about a month), the hamster is difficult to take solid food and need a special diet.

What happens if a hamster dropped from a height does not only depend on the circumstances of the fall, but also on the level of luck of the pet. When trauma has occurred, the pet is not too much we can help. Even a veterinarian rather gives a forecast, not a doctor animal. Therefore, the main efforts should be directed at preventing injury in hamsters. This careful handling, a suitable cage and walks in a special ball.

Colds and runny nose the hamster

Hello. Recently my Hamster fell from a height of approximately 1 m. With cutters and legs, like everything is normal. I'm worried about one thing. After the fall of the Hamster was Like to sniff. Could this mean something or pet behaves just after the shock??

what to do if a hamster fell from a height and priests bleeding???

Hello, I have dropped the hamster a height of about 1m, a long time lying motionless, and now goes staggering, sometimes falling to the side, a wheel to run around in his pants and he falls out with him. Is there any possibility to recover it???