Among all animals, especially rats, are considered the most intelligent, despite the fact that the volume of their brain is extremely small.Their survival skills are amazing. All this leads to the conclusion that rats are smart animals.

Because of the survivability and genetic similarity with humans is their use as experimental animals. For survival they will use all their mental potential. Smart rats get the information they need unknown ways, they are able to remember the surrounding terrain, as if focusing on the internal brain map. Thorough research allowed us to determine that:

Apparently, features of the intelligence of a rat do not allow her to remember large amounts of information, so they keep in memory only what is essential for survival. They easily solve complex trap, quickly realizing how to avoid death and to get food. If we are talking about food, they are extremely creative. Theoretically, all it can and pet rat, but living in a small cage, they do not apply them. 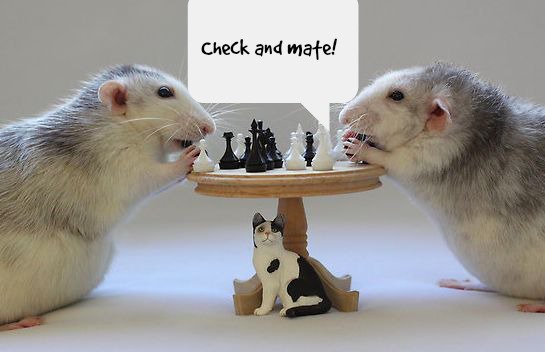 There are many stories about the abilities of rats, and how they use their skills and intelligence to produce food. One of the most famous is the case when creating a living ladder, they fell in a container of vegetable oil for a few hours and removed all content. Many interesting facts were learned by the scientist during the research:

These and other experiments clearly show the power of the rat's intelligence and their unique abilities.

How many chromosomes in rats

In its genome the rats really resemble a human. Consider the genetics of rodents and primates as close relatives, as confirmed by paleontology. A detailed comparison showed that human and rat are 80% identical genes.

Perhaps it is the number of chromosomes gives them their exceptional mental ability, although from a scientific point of view, this phenomenon is not surprising. It is known that all mammals, including humans, are descended from small lizard – of Theriodonts. Rodents and primates were divided into separate branches about 30 million years ago, but in between left a lot in common.

Read also interesting article about the rats in our article "The biggest rat in the world".

How many live rats

Why do rats squeak

The habits and character of domestic rats

The size and weight of wild and domestic rats

Can a rat swim?

Anatomy of the rat: the internal structure of the organs and skeletal features

Features of the appearance of rats