The basis of the diet hamster are cereals.Industrial feed is often put sunflower seeds, but not because the other is not. They're just the cheapest. Home to diversify the menu of a rodent you can own. Owner is to understand: what seeds can be given, and which deadly if the hamster roasted seeds, how much and how often to give such a treat.

The most common and inexpensive is sunflower seeds. But the owner, wanting to pamper a pet this treat, is faced with the fact that the raw seeds found on sale not so simple. All are sold roasted, which have a more intense flavor. For health they are not dangerous, but under high temperature, many vitamins are destroyed. Therefore, the raw seeds are much healthier. As such, the hamsters eat them in nature.

Give the hamsters roasted seeds can be used only if the roasting is not used oil or salt. Better if they were just dried in the oven.

Experienced breeders hamsters use the raw seeds for sprouting. Sprouts useful for rodents. Most often for this purpose, take sunflower and flax seeds.

Seeds as a drug 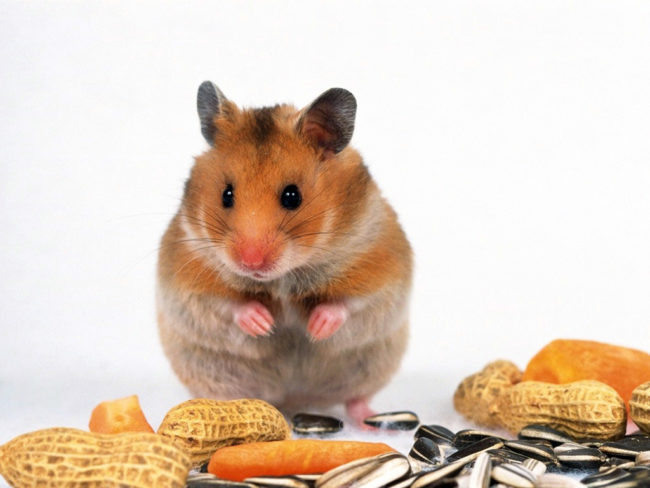 Hamsters give pumpkin seeds not only as a delicacy but also as a mild anthelmintic. Parasites are effective, the raw seeds containing Cucurbita. A good alternative to pharmaceutical anthelmintic, which can be toxic for tiny rodents. The seeds of squash like pumpkin in composition, as detrimental to parasites, and store them is not difficult.

Flax seed normalizes bowel activity, profilaktirujut constipation, makes the skin shiny and healthy. This effect gives a high content of fiber and fatty acids omega 3 and 6. Similar effects have sesame seeds. However, flax, and sesame seeds give a little, as medicine, because of the high fat content. And only in raw, heat-treated sesame seeds loses its beneficial properties.

Watermelon seeds: a matter of dispute

Because the pulp and peel small Pets are contraindicated, the owners of the doubt – can hamsters seeds of watermelon. In vain, because the flesh threat because of the excess water and sugar, and peel accumulate toxic nitrate. Seeds can be given if the pre-rinse them and dry. Just prepare melon seeds, so they were not sweet.

If you sprinkle in the manger feed purchase, it is possible to notice that the hamster eats seeds in the first place, and with great gusto. If you give this nutritious product without restriction, it will lead to obesity. Fat hamster lives a short time, can suffer from diabetes and other diseases.

Sunflower seeds are composed of half fat and the rest of the seeds contain much oil. In case of excessive alcohol consumption of the liver of the rodent can not withstand the load that shortens the life of the pet.

In the industrial feed all seeds are untreated, so the owner never comes to husk the seeds before giving them to the hamster. The process of cracking the shells – more fun for the rodent, bored in a cage. On large seeds hamster grind teeth. It would seem from the husk one use.

However, much depends on the type of animal. For dwarf specimens of the husk of trouble: melon seeds, pumpkins are so big that they can get stuck when you try to stuff them in the cheek pouches. Peel of sunflower can hurt cheek pouches a sharp edge, which leads to inflammation and abscesses.

Therefore it is better to give Djungarian hamsters cleaned seeds or strictly individually, so that the animal ate the treat immediately, rather than trying to store for future use. The attempt of a hamster to push in another mouthful of the seeds look funny, but this game is dangerous for the pet. You can't let the dwarf hamsters to reach a handful of the delicacy. Score cheek pouches to a dangerous limit can be almost any seeds, even watermelon.

A big mistake is to assume that the hamster is eating everything, and it is possible to give any products. The owner can give the rodent a deadly treat by accident. We are talking about the seeds – or rather seed contains hydrocyanic acid.

Cherry, cherry, apricot, Apple, plum – allowing the hamster to eat juicy fruits, it is necessary to remove the seeds from them. These fruits contain in the bone amygdalin, a glycoside which the body turns into a dangerous hydrocyanic acid. It gives the typical almond bitter aftertaste.

In rodents the metabolism many times faster than a human, and the body weight is disproportionately less. Therefore, for the dangerous animal the smallest dose of poison, some people won't even notice.
The most dangerous apricot pits – they are content of hydrocyanic acid the highest, plus they are marketed in shelled form, as a cheap substitute almonds.

No almonds or apricot pits can not give a pet!

Insidious Apple seeds: a few are aware of prussic acid and consider them a useful product a source of iodine. In Apple seeds amygdalin really a bit – three times less than in apricot. But to risk the health of your pet, allowing him to eat the Apple core, not worth it.

Sunflower seeds are not food, and treats. So they brought the hamster only benefits, you should give them correctly:

The seeds can be used for promotion and training your pet, as hamsters adore them. It is also a good bait if you pet escaped from his cage. A varied and nutritious diet contributes to longevity of the animals. So to feed a hamster sunflower seeds not only possible, but necessary.

Grains hamster: what to give and what not

Food Djungarian hamsters: what you can and cannot give Djungarian

How and what to feed hamsters: diet at home

Can you give hamsters parsley and dill

Grass in the diet of hamsters

What nuts can you give hamsters

How often should I feed the hamster