Often the sellers at the pet store have no idea about how to tell a boy hamster from a girl, and sometimes deliberately disingenuous in order to sell "overstayers" of the animal.Not only in order to avoid incidents with same sex mating animals, but also in order to share the offspring – little Djungarian or Syrians.

To determine the sex of a hamster, you need to look at the genitals of the animal. To take him in hand properly, if a tiny rodent to squirm in panic, from the inspection will not be good. Hamster take his hand, holding the ring out of the thumb so that the rear half of the body hanging freely. When you need your other hand to gently support the animal on the bottom. 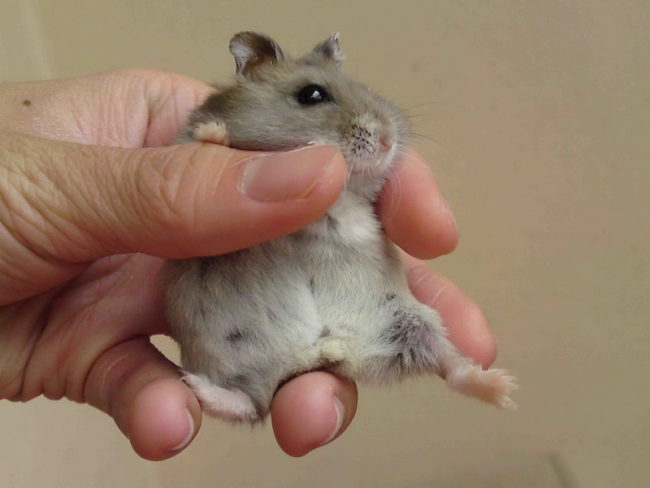 Do not lift a hamster by the scruff, flip to back. In cases of doubt you can ask the assistant to take a photo and as soon as possible to let the pet in order to avoid severe stress.

Inexperienced Hematology primarily from animal testes. This approach often leads to erroneous conclusions, especially if you want to determine the sex of the Djungarian hamster: genitals too small. In the young they are not completely developed, and sit opposite-sex homyachat in different cells need not later than the age of 4 weeks, to avoid inbreeding and unwanted offspring. To find out how many weeks the baby will help our article about determining the age of the hamster. We cannot exclude cases where the testicles do not descend into the scrotum and remain in the abdominal cavity, and is completely invisible (cryptorchidism).

If the testes are clearly visible, there is no doubt that the hamster is a male. Convex education almond shape in the crotch area can be distinguished at the age of 35-40 days. With age, the testes increase significantly in size, and to determine the sex of the adult Syrian hamster is is easy.

Reliable sign by which to distinguish the female from the male at the age of 3-4 weeks – the location of the hole relative to the urethra to the anus. The male between the holes is the distance, covered with hair. An adult Syrian hamster period is 1-1. 5 cm, the juveniles of about 0.5 cm in females the vagina close to the anus, and between them grows the wool, and forms a characteristic "bald spot". Organs difficult to understand dwarf hamsters because of their small sizes, if you find the urogenital opening is not possible at all, before you gungari girl.

The older the animal, the easier it is to recognize the female or the male in front of you. Dwarf hamsters this process is always harder than the Syrians, because of the tiny size of these animals.

To find out the sex of the animal is important, even if it is assumed a single isolated content. At least in order to give the hamster a name. If the rodent is bought for the child, the little master will inquire a boy or a girl. Conscious purchase of Jungaria-boy at the pet store will allow you to avoid buying a pregnant female in the case of joint content homyachat.

The definition of sex – a mandatory skill for those who plan to breed rodents. First, it is necessary for the selection of a pair, and then to separate opposite-sex offspring.

How to determine the age of the hamster

The smell from the hamster: causes and prejudices

How much are hamsters?

How to choose the right hamster

Best pet for a child: a hamster or a Guinea pig?

Having a hamster in the house?

Is there are allergic to hamsters?

It differs from Syrian hamster Djungarian?

Dangerous than a hamster