The owners of females who do not observe the rules of keeping hamsters will one day wonder why hamsters eat their young, because the maternal instinct in all other animals is aimed at protecting offspring.

Seeing how a hamster eats their children, people are terrified to get rid of the pet, sometimes simply stand the cage on the street, not bothering to find animal host.At the time of birth, the female does not feel the need to take care of the offspring, and destroy the litter. To prevent cannibalism, you should knit animals 4 months and older.

Especially often, the trouble happens if a female was purchased at a pet store already pregnant. A change of scenery – a lot of stress for your hamster, and it affects behavior.

If babies are born with some genetic deformities, defects, the mother will instinctively get rid of them. Will be eaten by the sick or weak kids. Defective offspring is often born as a result of inbreeding – inbreeding when mating animals from the same litter. Sometimes the female doesn't kill herself, but eats the dead for any reason, young. 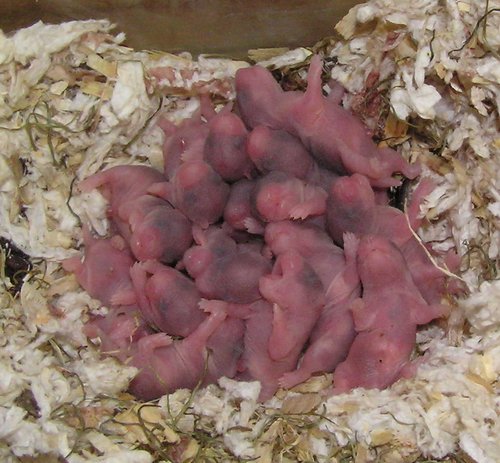 Females have 8 nipples, she could nurse 8-12 cubs, but if they were born of 16-18 pieces, the probability that "extra" mother moon. In this case, a "partial cannibalism" – from time to time the female eats of one or more kids, and the rest continues to feed, and they survive.

This situation is typical for multiple Syrians. The destruction homyachat begins in the first days after birth, and ends as soon as the babies learn to eat adult food.

The health status of females

Childbirth and lactation – a serious test for the organism of rodents. Babies grow incredibly quickly in the womb and after birth. If the mother's diet was insufficient, her body after childbirth is on the verge of exhaustion. Feed kids so the female can't, and to survive, she can have his children.

Any health issues, poor conditions of detention provoke such a development. If the female does not have enough water, food or locations in the cell, it will not grow offspring.

If the cubs would be a foreign smell, the female would kill them. Related to this is the prohibition to take kids on hands in the first week after birth. Given the nervousness of these rodents, should cease to stick your hand in the cage a few days before the birth of the cubs. Homyachihi eat the offspring when they feel the presence of outsiders, i.e., the danger.

During the breeding season, even a familiar and favorite host is regarded as an outsider.

The presence of other dogs

And Djungarian and Syrian hamsters are loners by nature. The presence in the cell of a male getting nervous both animals. The female becomes nervous and aggressive. She may first eat the male, then young, ready for everything just to remain the sole master of the territory.

Sometimes the father hamster eats their children. Exhausted genera the female is unable to stop him, and often not even trying.

Any emotional distress a pregnant or lactating females pose a threat to the offspring. Started repair with the sounds of the hammer, moving. You just remove the hamster from the house or to allow the cat to the cage.

Why do hamsters eat each other

Not always cannibalism among hamsters is associated with the birth of a helpless cubs. These rodents fiercely defend their territory from neighbors and other competitors. In nature dead enemy is a valuable source of protein. Another reason is that a dead animal should be disposed of so as not to attract predators. Will the losers have the opportunity to escape in the cage – no.

Proven fact: hamsters eat their relatives, and on occasion, – other, smaller rodents.

Hamsters should be separated, otherwise they will be fighting among themselves. Sex has no meaning. The owner may be ignorant about the feud for quite a long time, because the fights take place in the dead of night and daytime animals sleep. If one of the rivals will be able to get the upper hand, the second hamster mysteriously disappear. Eat a whole adult animal hamster may not work, or not enough time. But the situation, when the hamster ate hamster is not out of the ordinary event. They bite each other, not because they lack food. The corpse hamsters eat not so much from hunger, how many guided by instinct. At home the owner usually discovers on the morning of bloody remains, bones, or ugryzenye head of one of the hamsters. 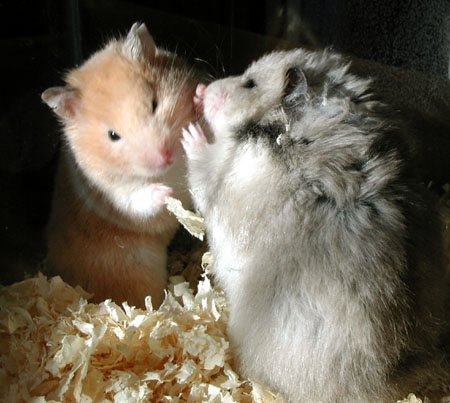 People are misled by the appearance of rodents of the family Khomyakov. They seem to be the epitome of harmless, cheerful, and laugh their habits. A person ceases to associate "furry" with the wilderness and its harsh laws.

Most hamsters eat their young the fault of the owner. Cannibalism is found among them, and in the wild, but much less frequently. The observance of certain rules when breeding these rodents will prevent this unpleasant situation. The owner must decide – why did he have offspring, but to keep the hamsters for fun.

Unacceptable joint maintenance of adult animals. Sometimes you can hear that Jungaria peacefully coexist with each other. But it's a ticking time bomb, the animals have the strongest stress. They don't fight only because the forces are equal. It is not necessary to check whether the hamsters eat each other. The spectacle is unpleasant, and for children and not at all traumatic.

My 1st village hamster hamster your child.I was very surprised. But I think that she doesn't hivatala protein (we don't eat meat and protein and write). But thanks for the info

I have a house in the same square, lived brother and sister, and one whose sister died. And this morning he found half a hamster but someone can not say exactly because he was otgryzli legs and pelvic bone.

Very sorry and encourage you to seat the remaining hamsters that would be a tragedy is not repeated.

My son and daughter lived Djungarian hamsters. Separate female and three males together. Yesterday found the head of the old male. Horror. All the rest were seated in different cells, but now I look again two males sitting together. Now tell her to sit again, and then all again.