The breeding of Djungarian hamsters at home sometimes occurs spontaneously if a couple kept in the same cage.Another thing, when breeding rodents – conscious decision. Then the approach to becoming a professional, and reproduction of Djungarian strictly controlled.

How to breed Djungarian hamsters

To prepare the area

Prior to mating prepare cells for different sexes of youngsters, a small kennel for mating. Adult animals are kept in their own cage. It is desirable to have at least one in reserve if the offspring do not succeed in time to attach. Although not unbearable much less the Syrians, the cage should not be less than 50х30 cm (can be more). For the prevention of obesity hamsters need to provide a running wheel with a diameter of 16-18 cm required drinking.

To the newborn baby feel comfortable, the temperature in a room maintained at 21-25 C. Cage, the females should stand in a quiet place in the shade. It is equally important to organize a full feeding. Rodent breeders strive to create Pets perfect conditions. This serves as a guarantee that the female will not eat their babies. 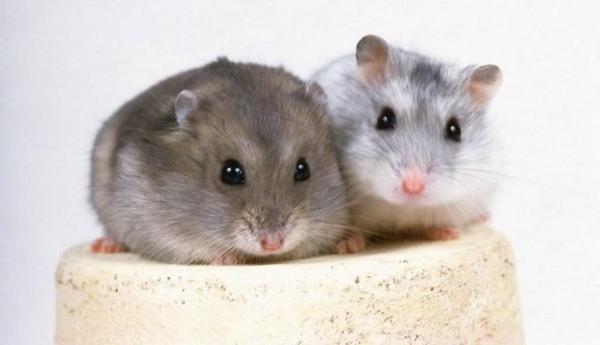 To get regular litter, you can keep one male and several females. Animals should not be related to each other. Buy them from professional breeders or for exhibition.

When buying at a pet store to track the origin of rodents is not possible, then a male and female, are buying in different stores.

Preference is given to animals with a friendly nature and perfect appearance. The female should not be too small: less than 40 g. the individual may be unable to give birth. The same danger threatens the hamster suffering from obesity.

Avoid not only inbreeding, but also interspecific. Djungarian hamsters can't breed with hamsters the Campbell. Although these dwarf species are very similar to each other and give viable offspring, there is a risk of krupnoplodnaya and complications in childbirth (the death of females). Hybrids can not be measured at the exterior at exhibitions, as it does not belong to the same species. The Campbells are prone to diabetes, and transmit the disease to their descendants.

To distinguish dwarf hamsters have their own: sellers often referred to as "Dzhungar" and sangursky hamsters, and campbello. Especially easy to confuse them in the standard color. A distinctive feature of Jungaria – extension black stripes running along the spine, a kind of diamond shape on his head. 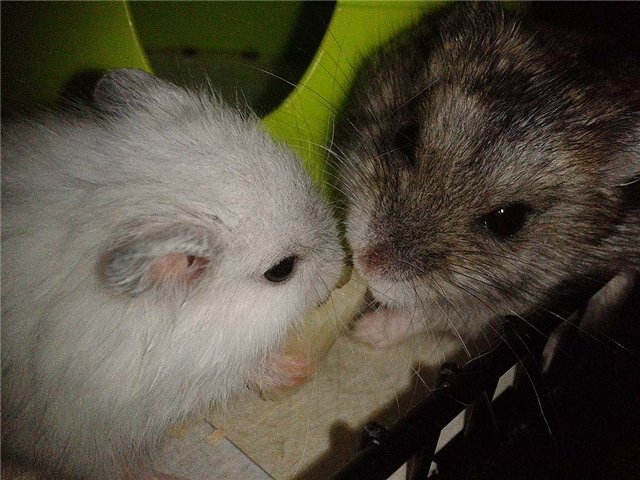 Drugarice have a limited number of colors, the most common still natural. Eyes can be black, unlike Camp. Breeders have managed to obtain unusual colors of fur:

Cubs rare color very appreciated, but when breeding hamsters with Jungarian "colored" fur, need to know the specifics of genetics.

It is impossible to bring two animals of the color tangerine because they will give the descendants of the lethal gene. During the knitting of the two "pearls" of the fruit is also is not viable, so the seed will be scarce or absent.

The rest of the colors combine well with each other, giving interesting variations. 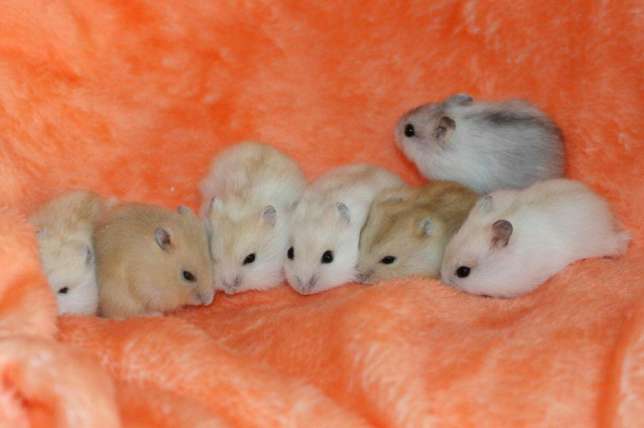 In group content the hamsters start to breed at the age of 4-5 weeks, but binding of such young animals is extremely undesirable. Female first time driving in 4-5 months. Pregnancy lasts 18-22 days, after which the female feeds the young with milk for 3-4 weeks.
And bearing fruit, and lactation greatly Deplete the body. To preserve the mother's health and getting strong offspring, the female is not fertilized within 2-3 months after birth. A hamster will bring 3-6 litters, and then to reduce it, it becomes dangerous: after a year the bones of the pelvis are rigid and the female can't give birth to.

The offspring of Djungarian not as numerous as the Syrians: the average number of pups – 4-6 pieces. Kids grow very fast and in 4 weeks is not dependent on mother. 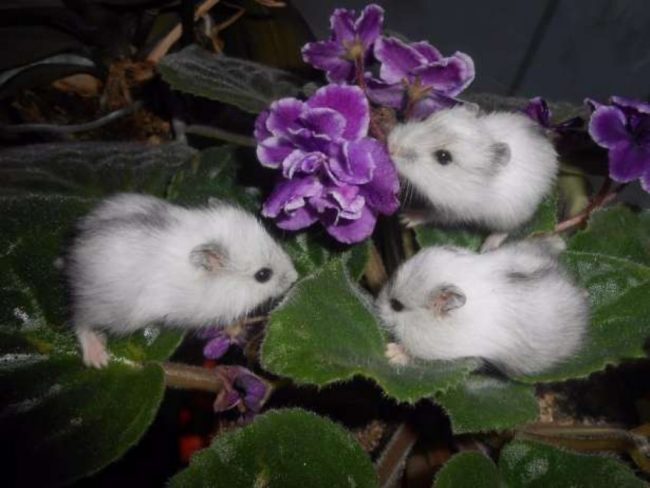 In the calendar, celebrate landmark events: mating, birth. Record the number and color of pups plan the Seating arrangements of the young. Immediately after birth, set the date, when Jungar homechat will go to the new owners. Analysis of the records helps to identify successful and unsuccessful pairs for mating.

How to multiply Djungarian hamsters

Males and females kept in individual cages, and mating is carried out on neutral territory – in a box or carry. Animals can fight, so the process should be watched. Sexual hunting of females occurs every 4th day and lasts about a day.

The difficulty is that the signs of estrus in dwarf specimens poorly visible. To define it only by the reaction of the female partner.

Dwarf hamsters – dzhungariya and the Campbells – not so aggressive to each other as the Syrian. So you can often hear about living together. It is convenient for the owner: it is not necessary to arrange the mating, it is necessary to clean and maintain one cell, not two. But the disadvantages of this approach outweigh the advantages.

If one cell are heterosexual Jungaria, reproduction is impossible to control. A female gets pregnant too often. The bearing of the fruit coincides with lactation, these animals die, fight, devour the offspring. 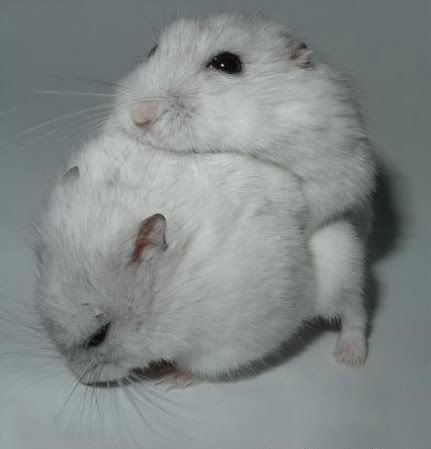 Breeding hamsters of Jungaria: arguments against

Hamster the already short-lived, and in the case of depletion of body work to light offspring is almost two times less. If the pet will not die due to the pathology of childbirth, the breeder has up to the death over a female, who can no longer make a profit.

In order to avoid cannibalism (eating their own young), the female need to ensure privacy. During pregnancy when the animal is preparing a nest, and then during lactation, the female is not desirable to take up or disturb anything else. It is necessary to consider if the rodent belongs to the children.

Dwarf hamsters will grow wild if the young are not tame. Need daily to draw hamsters in handwith patience and caution. It is time consuming and you still need to organize feeding, change water, clean cages.

Before you plant out the young, each animal is necessary to determine the sex. Himachalam need to look for owners. The new owners are interested in many questions on maintenance and food, they will have to answer to the breeder, if he does not sell pups on wholesale bird market.

Breeding of Djungarian hamsters at home can be a very interesting exercise. The nursery will not start to generate income until you earn a great reputation. To do this, you can only expect that the sale of the offspring will cover the cost of food and accessories.

Thank you! Interesting to read 🙂

Thank you for the information.