Even those owners who regularly engage in mating and breeding hamsters, rare will be lucky enough to see give birth to hamsters.Many dream that their sweethearts were born small Jungaria.

How many days do hamsters give birth after mating, depends on the type of animals, number of fruit, conditions. The average is 20 days. The owner of the female should imagine, what if the hamster gave birth, because sometimes the animal is already pregnant.

As a born hamsters

Birth of hamsters is very fast. The female adopts a kind of sitting position, twisting during fights. She pulls the fruit from the birth canal, helping himself with his teeth. The spacing between kids is only a few minutes. During this time (5-15 minutes), the female manages to chew through the shell of the fetal to newborn inhaled. She chews through the umbilical cord and begins to lick the cub. The female eats the SAC and placenta.

Childbirth — the final phase of the cycle of breeding Syrian hamsters. Normal length is around 2-3 hours, sometimes up to 6 hours. Sometimes Syrian hamster giving birth to an impressive litter – 12-16 pieces. Then the babies are born too soon. During the short interval between contractions, the female may not be able to take care of the kids. Then some of them die, not freed from the fetal membranes.

Birth of hamsters Djungarian lasts 1-2 hours interval between the appearance of toddlers 15-30 minutes. In a litter is rarely more than 5 calves. Dwarf hamsters are more common complications in childbirth caused by the large size of the fruit relative to females. Below Djungarian hamster gave birth without complications, they are not allowed to cross Campbell. Useful information about the rules of reproduction you can find on the page dedicated to the breeding Djungarian hamsters.

What to do when the birth of hamsters 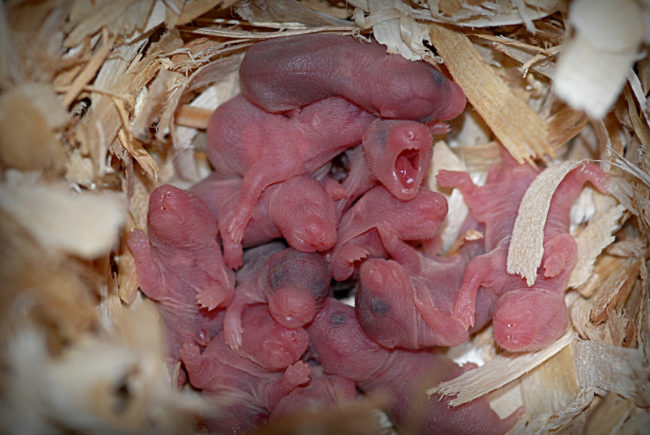 Hamsters are born naked, they are incapable of thermoregulation.

You must provide the female with material for the nest (paper towels) and maintain the house temperature in the range of 21-25 C.

Hamsters give birth easily and quickly. Not needed, owner is to simply observe. But if the hamster gave birth to so many kids that can't cope, you can help her. Homyachka wrapped in a paper towel to remove the fetal membrane and mucus. Then make a gentle massage. The umbilical cord is cut, stepping back a bit from the tummy. The cub placed in the nest, stirring it with others.

If the Syrian hamster gave birth and immediately began to destroy her brood, you can not interfere. What to do in this case: offering the hamster protein-rich food, you can save the part of the kids.

After giving birth need to make sure that the female refused to feed.

The emaciated hamster allowed to rest for 4-6 hours. If she begins to care for cubs, the mother close with the brood in a small box so she couldn't escape. Often within half an hour the female hamster let kids to your nipples.

Even by the standards of a caring mother hamsters are not too stand on ceremony with children. Animal rests directly on the brood, not caring about not flatten offspring.

Great detail on the development and care for toddlers we are told in the article about baby hamsters. Highly recommended reading!

A disease that occurs in the last days of pregnancy. Leads to the death of females and broods during childbirth or in the first days after. There is no treatment.

Females older than 10 months of the articulation of pelvic bones lose their elasticity, causing the animal to give birth. It is possible to krupnoplodnaya, if young enough (1-3 pieces).
In such situations, strong uterine contractions can't push the fruit out. If the DOE is straining for longer than 10-15 minutes, and the baby is not shown, to caesarean section.

How much time do hamsters give birth – it depends on the number of children. The mother may rest a long time between the appearance of kids, even to eat. Should not be unproductive labour.

The death of fetuses in the uterus

With infections, poor nutrition or genetic deformities, the cubs may die. The female can give birth and die from sepsis. Treatment – surgery to remove the uterus.

Within a couple of days the female is cleared and reduces the uterus, with hemorrhage from the birth canal. If bleeding is severe, or the discharge has an unpleasant smell, do not stop for more than 3 days is a sign of detention of the placenta or the presence in the uterus of a dead fetus.

What to feed birth to her 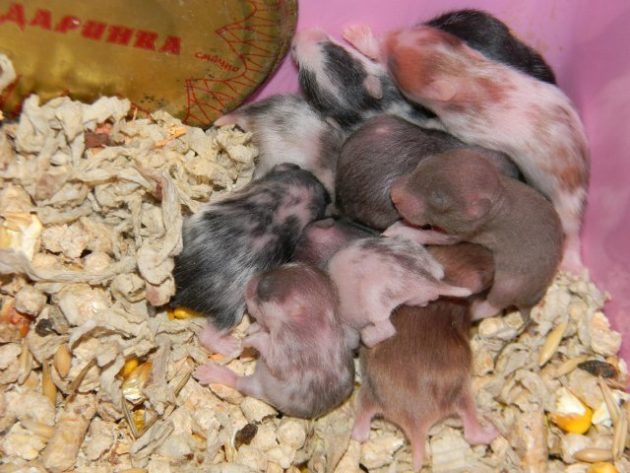 Gestation fetuses, birth and subsequent lactation is a huge burden on the body. Even with the full diet exhaustion inevitably, a hamster loses a third of the mass. Not surprisingly, after half an hour after birth the female is ready to eat. To feed hamster after giving birth should be different than the normal adult animal.

Need females in the grain mixture is doubled. Food should be of high quality, contain at least 18-20% protein and 7-9% fat.

Besides dry food should be fed to nursing her juicy and protein feed. Give daily "safe" vegetables, greens, sprouts. Three times a week – cooked lean meat, low-fat cottage cheese, boiled egg. As an additional source of energy can give you some seeds (pumpkin, sunflower) and nuts.

The food given to the mother, will be to try and homechat, so product selection should be particularly careful. If you were born Djungarian hamsters, particles of food must be small, so as not to injure the cheek pouches of the dwarf babies.

During pregnancy and lactation water consumption increases several times. You need plenty to provide the animal with fresh drinking water.

Do I need to isolate the male hamster after giving birth

The separation of animals is in their nature solitary animals. When the female hamster gave birth, the isolation of the male is mandatory for two reasons:

The prevention of pregnancy

After the hamster has given birth, she needs at least 2 months to recover and restore weight. If the male is not to isolate, the unavoidable cases where the female feeds the children, being pregnant again. She's weaker and much thinner, eats the litter. The male continues to impregnate her immediately after the hamsters were born.

Syrian hamsters are strict loners, so the male is rarely present when the babies were born. Dwarfs often contain together. Even if the pair did not show aggression to each other, the male should be isolated when the hamsters were born. Otherwise there is a high risk of cannibalism: the female will eat the male, or either parent shall devour the young.

How often have drugarice – depends on the owner. Up to 6-8 times a year when sharing content, 2-3 times a year for responsible breeding. It is not necessary to arrange a baby hamster out of curiosity or fun. Owners often permit the mating of animals, but have no idea what to do when a hamster gave birth.

Thank you! For good advice🙂